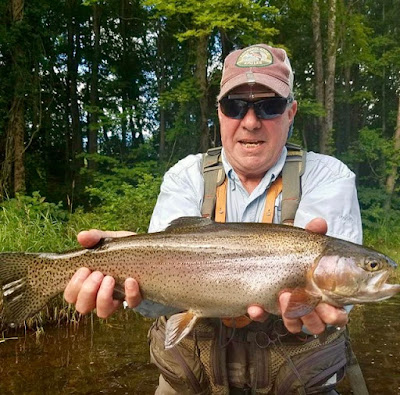 Zach St. Amand has consistently been getting his clients into big fish lately, check out this recent client Rainbow Trout. Flows remains medium & perfect (257cfs in permanent Catch & Release/C&R), water temps are cool, the weather is very pleasant,(highs 70s, lows 50s), and Tricos are falling in the mornings. Life is good.

The Trico hatch (#22-26 ) is getting stronger, and are typically on the water in early to mid mornings. The spinners tend to fall at an air temp of about 68 degrees. They are as far up as Pipeline Pool & progressing upriver. The other hatches you might see are Needhami #24-26 & Summer/Winter Caddis #18-24 in the mornings, Isonychia #10-14 in the latter part of the day (5pm 'till dark), and small Blue Wing Olives (BWO's) #22-26 & Cahills/Summer Stenos #12-14 in the eves- stay until dark & beyond for the best evening dry fly action. There are still a few Sulfurs averaging #18 in Riverton ONLY (from about Hitchcock/Rt 20 bridge up to the dam), but that hatch is almost over.

Summertime bugs are smaller on average, so when nymphing make sure to downsize your flies. #18-22 nymphs are often the key to success, with fly size more important then the exact pattern (although I prefer either a little flash or a fluorescent hot spot in my small nymphs). Some days small flies are the difference between struggling to hook trout versus catching a bunch. The two main exceptions would be Isonychia nymphs #10-14, and big Stonefly nymphs #6-12. Isos are typically active later in the day, say late afternoon through dusk. The evening Cahills are also bigger at #12-14, and can be nicely imitated with either a Fox Squirrel or Hare's Ear nymphs. The big Stonefly nymphs emerge by crawling out onto rocks overnight and in the early mornings, making early/mid mornings prime to fish their large imitations for larger trout. If you do have a big fly on, make sure you also have another pattern in your rig no bigger than a #18, it's more in line with what they are seeing this time of year.