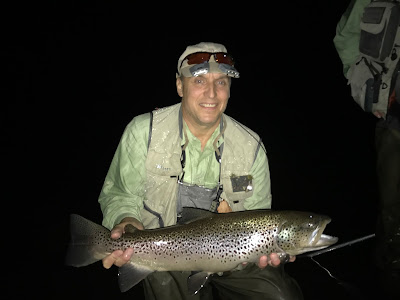 Check out this 27" brown customer Thomas Inglis caught recently in the Farmington River, what a tank! They don't come easy, but they are in here. The biggest fish are most apt to eat your fly in the early morning, late evening, and at night. An even bigger brown was caught on a fly several weeks ago, it was 31".

Tricos #22-26 have started up recently and are on the water in early to mid mornings. The spinners tend to fall at an air temp of about 68 degrees. So far they have been light to moderate in numbers but have been seen as far up as Pipeline Pool. The other major hatches are Needhami #24-26 & Summer/Winter Caddis #18-24 in the mornings, Isonychia #10-14 in the latter part of the day (5pm 'till dark), and small Blue Wing Olives (BWO's) #22-26 & Cahills #12-14 in the eves- stay until dark & beyond for the best evening dry fly action. There are still some Sulfurs averaging #18 in Riverton ONLY (from about Hitchcock/Rt 20 bridge up to the dam).