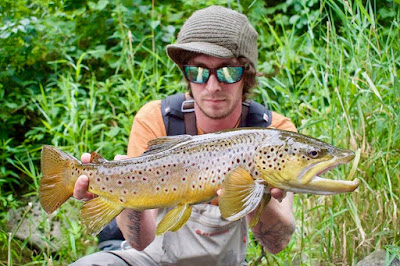 Matty B with an awesome Farmington River brown trout he caught this week. There are plenty of big trout scattered throughout the river,  but catching them is often not easy. Fishing early & late will give you the best shots at big fish. Bugs/hatches vary from night to night, so be flexible. Isonychia are still good in fast water in the evenings, and are a nice big bug in contrast to the other mostly smaller bugs, plus the better trout seem to really key in on them.

Just arrived this week, the brand new Scott G rod (this replaces the G2). This is not the original G rod, but rather the new incarnation in this series using the latest graphite & high-tech construction. Louis that work here has been fishing a prototype of the new G in the 9' #4 version, and he feels it is one of the finest 9' #4's he has ever fished. FYI we also have the new Sage Spectrum series of reels here now, and they are impressive. We've also received tons of new fly tying materials in recent weeks, and a book order came in this week (plus we got in 2 BIG collections of used books, and most are up on the shelves now).

Tricos #22-26 have started up recently and are on the water in early to mid mornings. If I remember correctly, the spinners like to fall at an air temp of 68 degrees.  So far they have been light in numbers but have been seen as far up as pipeline.  The other major hatches are Needhami #24-26 & Summer/Winter Caddis #18-24 in the mornings, Isonychia #10-14 in the latter part of the day (5pm 'till dark), and small Blue Wing Olives (BWO's) #22-26 & Cahills #12-14 in the eves- stay until dark & beyond for the best evening dry fly action. There are still some Sulfurs averaging #18 in Riverton ONLY (from about Hitchcock/Rt 20 bridge up to the dam).