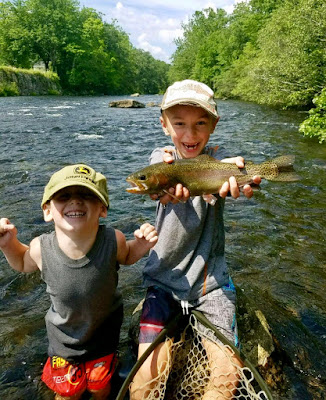 We have finally gotten word that Tricos are starting to show up.  So far they have been light in numbers but have been seen as far up as pipeline.  Still the dominant hatches are Needhami #24-26 & Summer/Winter Caddis #18-24 in the mornings, Isonychia #10-14 in the latter part of the day (5pm 'till dark), and small Blue Wing Olives (BWO's) #22-26 & Cahills #12-14 in the eves- stay until dark & beyond for the best evening dry fly action. There are still some Sulfurs averaging #18 in Riverton ONLY (from about Hitchcock/Rt 20 bridge up to the dam).

Ants, Beetles and Hoppers have been working well in the afternoons, when hatch activity is low.  We are also starting to see some decent numbers of  flying ants #22-24 in the afternoons on the more humid days.