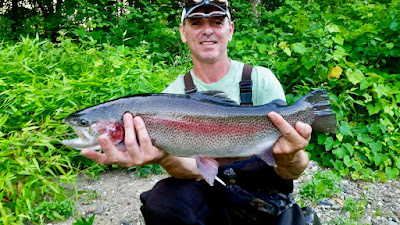 Still plenty of trout to be caught both inside & outside of the permanent Catch & Release (C&R)/TMA. Check out this impressive 25" rainbow caught & released last week on a nymph. I forgot the customer's name (sorry), but he said it fought like a steelhead (it's almost as big as one!). Fishing conditions remain excellent, with medium flows & nice cool water.

Water temps from the dam in Riverton down through New Hartford are still cool, ranging from mid/upper 50's to mid 60's lately (coolest upriver and in mornings, warmest downriver and later in the day). Dominant hatches are still Needhami #24-26 & Summer/Winter Caddis #18-24 in the mornings, Isonychia #10-14 in the latter part of the day (5pm 'till dark), and small Blue Wing Olives (BWO's) #22-26 & Cahills #12-14 in the eves- stay until dark & beyond for the best evening dry fly action.  Remember that Isonychia are a fast water bug, so look for hatching activity there. Nymphing is still mostly smaller flies in the #18-22 range, exceptions being Stoneflies #6-12 (brown, golden/yellow), Isonichia #10-14, and Caddis Pupa & Larva #16.

Ants, Beetles and Hoppers have been working well in the afternoons during the when hatch activity is low The best evening f. If you're out in the evening, stay until dark if you can or you will miss out on some of the best hatches.

Isonychia are a fast water mayfly, so look for them in riffles, pocket water & pool heads- you generally WON'T see them popping in the slower speed pool water. Hatch time can start as early as late afternoon and go as late as dark, typically peaking in early/mid evening. Both the nymph and the dries fish well for this hatch. The nymph is an unusually good swimmer, so try both dead-drifting & swinging it, and at moments I've done better making short strips and retrieving it like a small streamer.