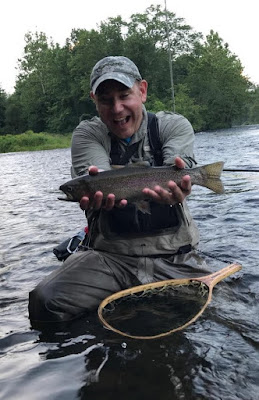 The FRAA is having a raffle to benefit Veterans (both Rivers of Recovery and Warriors & Quiet Waters). The prize is a premium Douglas Fly Rod Outfit (Sky 9' #5 4pc with Nexus 5/6 reel & Airflo line), they will announce winner on October 18th. Tickets are $20, and only 200 tickets will be sold- tickets are for sale at UpCountry Sportfishing.

I was out of state the past couple days, but reports remain good with no major changes in the hatches & effective flies. The hot weather of this week vanishes for the weekend, with highs in the upper 70's and lows down into the mid 50's. Expect water temps from the dam in Riverton down through New Hartford to range from mid 50's to mid 60's (coolest upriver and in mornings, warmest downriver and later in the day). Dominant hatches are still Neehami #24-26 & Summer/Winter Caddis #18-24 in the mornings, Isonychia ("Iso's") #10-14 in the latter part of the day (5pm 'till dark), and small Blue Wing Olives (BWO's) #22-26 & Cahills #12-14 in the eves- stay until dark & beyond for the best evening dry fly action.  Remember that Isonychia are a fast water bug, so look for hatching activity there. Nymphing is still mostly smaller flies in the #18-20 range, exceptions being Stoneflies #6-12 (brown, golden/yellow), Iso's #10-14, and Caddis Pupa & larva #16. Best nymphing is in the faster, broken more turbulent water. Total flow in the permanent Catch & Release (C&R)/TMA is currently a very nice & normal 304cfs (262cfs from dam in Riverton plus an additional 42cfs & dropping from the Still River) as of 8am this morning (Friday).

Small Rusty Spinners #18-26 and Terrestrials #14-18 such as ants and beetles have been working well at moments, especially midday when hatching activity is normally sparse at best. The best evening fishing is currently after 7:30pm. If you're out in the evening, stay until dark if you can or you will miss out on some of the best hatches. Sulfurs #16-18 are only in the upper river from Riverton (Rt 20 bridge by Hitchcock) upriver to the Goodwin Dam. Isonychia #10-14 and Light Cahills #12-14 are found in the evenings throughout the river in light numbers- best hatching for Iso's is from about New Hartford up to the Still River (Pipeline Pool/Lyman Rock).

Isonychia are a fast water mayfly, so look for them in riffles, pocket water & pool heads- you WON'T see them popping in the slow to moderate speed pool water. Hatch time can start as early as late afternoon and go as late as dark, typically peaking in early/mid evening. Both the nymph and the dries fish well for this hatch. The nymph is an unusally good swimmer, so try both dead-drifting & swinging it, at moments I've done better making short strips and retrieving it like a small streamer.

In the summertime, many of the hatching insects are smaller, when nymphing make sure to downsize your flies. #18-22 nymphs are often the key to success, with fly size more important then the exact pattern (although I love either a little flash or a hot spot in my small nymphs). Some days small flies are the difference between struggling to hook a trout versus catching more than you can count! The two main exceptions would be Isonychia nymphs #10-14, and big Stonefly nymphs #6-12. Iso's are typically active later in the day, say late afternoon through dusk. The big Stonefly nymphs emerge by crawling out onto rocks overnight and in the early mornings. If you do have a big fly on, make sure you also have another pattern in your rig no bigger than a #18, it's more in line with what they are seeing this time of year.

We are closing out our Sage Salt, Sage Accel, Sage Bolt, and Winston Nexus fly rods in store and online and can be found on our Used / Store Specials page. Our closeouts are first come first served and won't last long so don't wait to come in or place an order.

Cortland's "Top Secret" Ultra Premium Fluorocarbon Tippet is now in stock in 3x-8x. This stuff has been difficult to keep in stock since it arrived recently. Customer & guide feedback on this new product has been exceptional. No hype or exaggeration, it literally is the world's best fluorocarbon tippet, hands down. We've found it to be super strong, unusually flexible, hold & knot like a champ, very abrasion resistant, have excellent clarity- it just is an amazingly durable tippet. The combination of high break strength, stretch, and perfectly smooth plasma optical quality outer finish make it hard to break off fish & flies, and despite the slightly higher price tag, most using it report they go through it at about half the rate of normal tippet due to it's amazing durability.