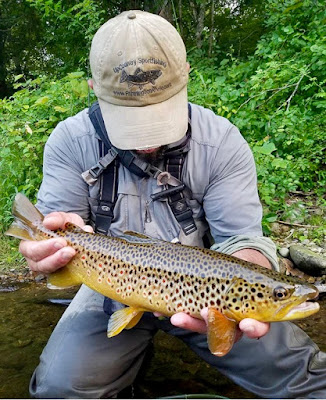 Farmington River brown trout don't get much prettier than this one Zach St. Amand is holding. Some very nice fish continue to be landed by some anglers, along with plenty of average ones. A few giants in the 2 foot plus class have been landed this summer by some lucky (skilled?) anglers. It's all about being in the right place, at the right time, and making a good presentation.

Flows remains excellent & normal at a total of 241cfs in permanent Catch & Release/C&R (226cfs from dam in Riverton, 15cfs from Still River) and the water temps are great (upper 50s/low 60s lately). Weather has been just the way I like it, with long range highs averaging in the 70s, and lows in the 50s (even mid 40s some nights!). Tricos are currently the morning glamour hatch, with the spinners falling when air temps are in the mid/upper 60s.

The Trico hatch (#22-26 ) is getting stronger, and are typically on the water in early to mid mornings. The spinners tend to fall at an air temp of about 68 degrees. They are at least as far up as Pipeline Pool/Lyman's Rock, and quite likely above that up into Riverton by now. Other morning hatches you might see are Needhami #24-26 (getting near the end though), and the Summer/Winter Caddis #18-24. Afternoons are more about terrestrials, and look for Flying Ants (#18-24) if we get a warm & humid day. Later in the day, look for Isonychia #10-14 (usually about 5pm 'till dark), small Blue Wing Olives (BWO's) #22-26, and Cahills/Summer Stenos #12-14- stay until dark for the best evening dry fly action. There are still a few Sulfurs averaging #18 in Riverton ONLY (from about Hitchcock/Rt 20 bridge up to the dam), but that hatch is almost done