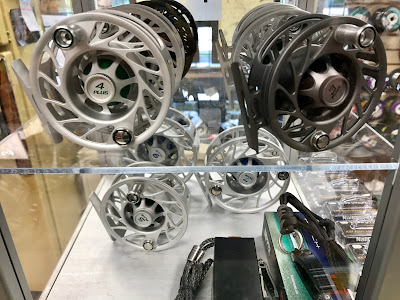 It's that time of year when new products start showing up. Hatch has done a re-design of their Finatic reel. It now has a bead-blast matte finish/new colors, it's lighter, and they improved the drag range and made the drag seal truly water-tight. We're big Hatch fans at UpCountry. FYI the spools are compatible with the previous generation of Finatics. Hardy has some new rods out, including the Zephrus Ultralite and the new Demons. Standouts include the Zephrus Ultralite in 8' 8" #3 & 8' 9" #4 for dry flies, the "crossover" Zephrus Ultralite in 9' 9" #2-5, and the fresh & saltwater Demons at $500 (they now use Sintrix 330 technology, and are probably the most durable rod out there at that price point, and still nice & light). The 9' 9" Zephrus rods are really cool, as they cross over from Euro nymphing to dry flies, making them a great choice if you split your time between the two methods but don't want to carry two rods (the #3 & 4 are great dual-purpose rods, the #2 is softer and more of a pure Euro rod for protecting lighter tippets, and the faster action #5 is more of an Indicator stick, but all four rods will throw dries when necessary).

I hadn't really noticed it, but apparently we are in a drought in our neck of the woods and the reservoir levels are getting low now. As such, the MDC reduced the release from Goodwin/Hogback Dam on Thursday to 50cfs (Riverton gauge reads 51.5cfs, Still River is 15.8cfs), making total flow in permanent Catch & Release (C&R)/TMA about 67cfs. They are releasing an additional 50cfs from Lake McDonough, which goes into the East Branch and dumps in about 3/8 mile below our shop, making the flow from there down 117cfs. Flow is low and similar to the end of last summer & fall. The upside to this is low flows typically equal more rising trout, easier wading, and it's easy to read the water. During low flows like this, only fish the better water where you have some flow & depth (depth is a relative thing, when flows are down, a 2' pothole in a 1' riffle can hold a big trout). The downside to low flows is spookier trout and less spots for the them to hold. A big key to success during these conditions is a stealthy approach, smaller flies, and use longer leaders (12 foot or longer). Stay a bit further away from the trout, and if you have a lighter line weight rod, now is the time to use it for a more delicate presentation. Highs well into the 80s from Saturday through Wednesday, combined with sunny weather, means the better water temps will be from New Hartford to the dam in Riverton. Start downstream in the mornings, then work your way progressively upriver as the day progresses- they will keep you in the best water temps. Lowest water temps will be from first light until late morning, so it's worth getting up early (this also helps you beat the crowds!). The upside to the temporary hot weather is Flying Ants- they tend to having mating swarms and fall to the water on warmer, humid afternoons. Make sure to have a least a couple (#18-24) in your fly box, as  trout LOVE them. 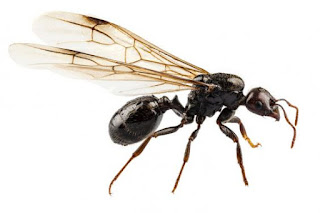 While I wouldn't say it's foliage season, we are starting to see some splashes of color. Still seeing  some Trico spinners #22-26 in the mornings, albeit the hatch is more upriver now- I'd stay between Campground and the dam in Riverton, and be aware the hatch is steadily moving upriver.  Trico spinners normally mate & drop to the water when morning air temps hit mid/upper 60s. Terrestrials (ants & beetles #12-18, hoppers #8-14), Attractor dries & Nymphs remain your best midday bets.  For Attractor Dries try: Mini Chernobyls #12-16, Monster Beetles #10, Stimulators #10-16 & Hippy Stompers #16-18, #10-14 Wulffs, etc. You can even combine a buoyant dry with a small beadhead nymph for a Dry-Dropper combo. Tie 1-3' of tippet to the dry fly hook bend, and run the beadhead nymph on the other end. Go longer (2-3') when there is not much hatching and/or you are fishing deeper water, go shorter (12-18") when there is hatching activity and/or you are fishing shallower water.