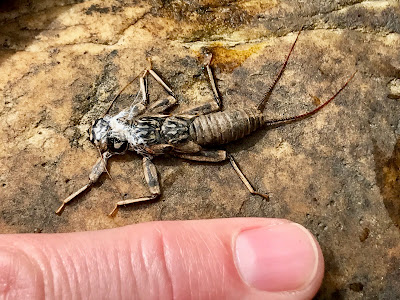 4pm Monday 9/25 update:
MDC just emailed us that they increased the release from the dam in Riverton from 65 to 90cfs, bringing total in permanent Catch & Release/TMA up to an improved flow of 105cfs. Still low, but a noticeable improvement and better for fishing. East Branch release was reduced from 50 to 25cfs (it comes in a little downstream of our store).

A customer brought in a rod tip he found on the river, and we did a little detective work and found out it was registered to a Robert Sedlak, and originally purchased in PA. If anyone knows him, please have him contact us.

While this time of year, combined with low flows, often dictates small to tiny flies at moments, they ain't all small.... Still plenty of big Stonefly shucks on the rocks in the fast water. Nymphing the fast water in the mornings with #8-10 imitations of these can be surprisingly successful, and will often put the fish of the day in your net. Pair it up with a #16 tan Caddis Pupa, they are also active in the mornings.

Fishing pressure has been overall lighter of late, so you may be able to get some elbow room. Air temps will remain hot through Wednesday, then cool down starting Thursday with highs in the 60s/lows in the 40s from Friday through Monday, love to see that. Now we just need some rain. Total flow in the permanent Catch & Release (C&R)/TMA is low at 81cfs (68cfs from dam in Riverton, plus 13cfs from the Still River). An additional 50cfs is being released from Lake McDonough into the East Branch (it dumps in 3/8 mile below UpCountry), making flow from there down about 130cfs. Riverton water temps are averaging mid 60s. I would recommend starting at your downstream most fishing choice, and then working your way upstream as the day progresses- this will keep you in water with better temps. Until it cools off, a good strategy is to start at first light if you can- some of the best fishing during summer conditions (low water/hot air temps) is early to mid mornings. Look for Flying Ants #18-24 the next few days, they love hot/humid weather. And the trout love them. They typically hit the water in the afternoons, but can be out anytime from late morning through early evening.

Cherry pick during low flows and only fish the better water where you have some flow & depth (depth is a relative thing, when flows are down, a 2' pothole in a 1' riffle can hold a big trout). The upside to low water is that it's easy to read the water and figure out where the trout are, and if there is a hatch you will typically see plenty of rising trout. The downside to low flows is spookier trout and less good holding water. A big key to success during these conditions is a stealthy approach, smaller flies, and use longer leaders (12-15 feet or even longer). Stay a bit further away from the trout, and if you have a lighter line weight rod, now is the time to use it for a more delicate presentation. A longer/lighter tippet (3-5' of 6x-7x) will greatly assist in getting a drag-free float with your #16 and smaller dry flies (5x for your Isonychia).

While I wouldn't say it's foliage season quite yet, we are starting to see some splashes of color. Morning Trico hatch is over in the C&R and near the end upriver, but you may still see a few in Riverton (think Hitchcock up to the dam). Terrestrials (Flying ants #18-24, Ants & Beetles #12-18, Hoppers #8-14), Attractor dries & Nymphs remain your best midday bets.  For Attractor Dries try: Mini Chernobyls #12-16, Monster Beetles #10, Stimulators #10-16 & Hippy Stompers #16-18, #10-14 Wulffs, etc. You can even combine a buoyant dry with a small beadhead nymph for a Dry-Dropper combo. Tie 1-3' of tippet to the dry fly hook bend, and run the beadhead nymph on the other end. Go longer (2-3') when there is not much hatching and/or you are fishing deeper water, go shorter (12-18") when there is hatching activity and/or you are fishing shallower water.

Summertime bugs are smaller on average, so when nymphing make sure to downsize your flies, especially when flows are lower. #18-22 nymphs are often the key to success, with fly size more important then the exact pattern (although I prefer either a little flash or a fluorescent hot spot in my small nymphs).  I like 5x-6x flurocarbon tippet for fishing small nymphs (5x is usually light enough, but they will sink quicker on a long 6x tippet due to decreased water drag from thinner tippet). If you like to go light on your tippet, I HIGHLY recommend the new Cortland Ultra Premium Fluorocarbon, it is stronger and more durable than any other fluoro on the market and will save you both flies & fish. 6x in this stuff will break less than 5x in other brands. Some days small flies are the difference between struggling to hook trout versus catching a bunch. The two biggest (literally, haha) exceptions would be Isonychia nymphs #12-14, and big Stonefly nymphs #6-12. Isos are typically active later in the day, say late afternoon through dusk. The big Stonefly nymphs emerge by crawling out onto rocks overnight and in the early mornings, making early/mid mornings prime to fish their large imitations for larger trout. If you do have a big fly on, make sure you also have another pattern in your rig no bigger than a #18, it's more in line with what they are seeing this time of year. Or pair it up with a #16 Caddis pupa.