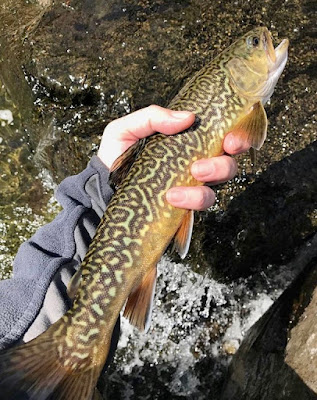 Good sized Tiger Trout caught recently by one of the fishy McFarland clan. Tigers are a brook trout/brown trout cross, they are a hybrid and sterile. While they can occur on rare occasions naturally, 99.9% of the time they are a hatchery creation, and even there they are difficult to raise to maturity. CT stocks a few scattered around the state every year, and for most anglers they are a prized catch. As you can see, they have striking coloration & patterning on them.

After several days of weather that felt more like July (80s & humid), things are cooling down to normal temps for most of this week, with highs upper 60s to mid 70s, and nights upper 50s/low 60s. I for one welcome the more fall-like weather. As of 9am this morning, the total flow will be about 125cfs in permanent Catch & Release (C&R)/TMA (104cfs release from dam in Riverton, 22cfs from Still River), water temps averaged in the 60s over the past week. MDC cut release from the dam by about 100cfs this morning now that Rainbow Reservoir is full/normal again, but they are releasing an additional 50cfs from the East Branch, which comes in about 3/8 mile below our store. Typically reduced flows equal more rising trout, easier wading, and spookier fish. Be stealthy when you approach the fish, and use longer leaders (12 foot plus).

We are in the front end of the foliage starting to get some pretty color, peak in our area is traditionally mid/late October. Still seeing Trico spinners #22-26 in the mornings, albeit the hatch is more upriver now- I'd stay between Campground and the dam in Riverton.  Trico spinners normally mate & drop to the water when morning air temps hit mid/upper 60s. Flying Ants have been on the water some days, especially afternoons when it's been sunny and humid. Make sure to have at least a couple in your box (#18-24), as when they end up on the water, it can seem like every trout in the river is rising! Terrestrials (ants & beetles #12-18, hoppers #8-14), Attractor dries & Nymphs remain your best midday bets.  For Attractor Dries try: Mini Chernobyls #12-16, Monster Beetles #10, Stimulators #10-16 & Hippy Stompers #16-18, #10-14 Wulffs, etc. You can even combine a buoyant dry with a small beadhead nymph for a Dry-Dropper combo. Tie 1-3' of tippet to the dry fly hook bend, and run the beadhead nymph on the other end. Go longer (2-3') when there is not much hatching and/or you are fishing deeper water, go shorter (12-18") when there is hatching activity and/or you are fishing shallower water.