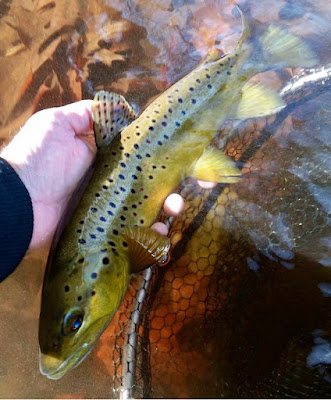 Black Friday has finally arrived, and the trout are just waiting for you to catch them... Check out this very pretty brown caught recently by Andy Lyons. Small Olive nymphs in #18-20 have been the ticket for him of late. Nice fishing conditions- flow is medium and the weather will be sunny with a high in the 40s for Black Friday, and Saturday will be even nicer, sunny and in the 50s. Light hatches of Winter Caddis have brought fish to the surface on some mornings, and afternoons have seen light hatching of Blue Wing Olives (BWOs). If you are trying to hit the Winter Caddis, make sure to be out in early/mid mornings. Other than that, the best fishing is generally late morning to late afternoon when water temps are highest and trout & bugs are the most active too.

New Stuff:
Simms new 2018 version of the G3 wader is here now- 190% more breatheable (!), 30% more puncture resistant, fleece-lined handwarmer pockets with side zips, a velcro docking station for a fly patch, and a G4-style reinforced seat/butt area. And the best part: NO price increase! We also have their new redesigned versions of their Freestone, Guide & G3 vests. And last but not least, their new super-warm heavyweight Guide Thermal OTC Sock. FYI the old style Simms vests are on sale at 40% off.

We will be open our normal 8am-5pm hours for this Friday, Saturday & Sunday.

Conditions:
Total flow at 8am this morning (Friday) is normal at 284cfs in the permanent Catch & Release (C&R)/TMA (225cfs in Riverton plus 59cfs from the Still River). Depending upon the day, time of day, and distance from dam, look for water temps can range from mid/upper 30s to mid 40s. Most of the water is coming out of the dam now, which helps to moderate the water temps and keep them a little warmer and more trout-friendly than on other streams.

Hatches:
Blue Wing Olives #22-26 to are still light in numbers and hatching in the afternoons, but should get heavier anytime now. Winter Caddis #18-24 started hatching in fishable numbers recently, look for them normally in early to mid mornings after colder nights. Other bugs you might see  include Black Caddis #18-24 and Midges #22-28. Subsurface with nymphs has been the most consistent fishing lately, but there have been windows of good dry fly fishing too. Streamers fished slow & deep have had their moments also. Colder water temps usually means you need to slow down your streamers and fish them deeper in the water column- make it easy for sluggish trout to eat your flies and you should find success.

FYI we are well stocked with just about everything right now, and last week a big Hareline tying materials order arrived, plus a big batch of Umpqua UPG silicone fly boxes (including some waterproof ones). In addition to trout tying materials, we also stock a very good selection of materials geared toward Great Lakes Steelhead. We have 12 colors of the deadly & popular Eggstasy Egg Yarn on the wall now, it works great on trout too. Just tie it in and take 2-3 wraps and then tie it off, easy peasy. Plenty of good hooks for Steelhead too, from Tiemco, Mustad, Gamakatsu & Daiichi.

Cold Weather Strategies:
The cooler late fall/early winter air & water temps are here now, so an adjustment in tactics is required. The warmest water by far will be coming out of the dam, and it will get colder as you move downriver during colder weather. The Still River will be coming in significantly colder than the dam water. As such, if you start early, begin in Riverton to hit the best water temps, and wait until the afternoon for the water temps to rise before heading downriver. In general during cold weather, the strategy is to focus on late morning until dusk when air & water temps are highest- it's the most comfortable, and the trout & bugs are most active then. Fish slow & deep and expect strikes to be s-u-b-t-l-e. You need to spoon feed the trout and make it easy for them to eat. I typically wait until at least late morning to start this time of year. The one exception to this is the Winter Caddis hatch. When they are hatching, you need to be on the water in early/mid morning to catch it (although some days they start later and go into late morning/early afternoon, but that is the exception). Other than that, no need to start early in my opinion. While they have been light so far, November is normally the start of our good fall afternoon Blue Wing Olive BWO) hatches & some surface feeding trout. If they aren't rising, go subsurface with #18-22 BWO nymphs. FYI I find I catch significantly bigger trout on BWO nymphs than on the dries, even when they are rising. Right now nymphing and fishing streamers slow & deep are generally the way to go, unless you have a hatch and steadily rising fish.

The cooler temps of November are usually what trigger our mid/late fall Blue Wing Olive (BWO) hatch of #22-28 bugs on the Farmington. We are seeing a light hatch of them currently, still not heavy yet, but could ramp up any day now. When Olives end on other rivers, our hatch is just ramping up. Look for them sometime between early & late afternoon (typically 1-4pm). Light tippets (6-8x, with 7x the norm) are the rule, not so much because they are "invisible" (they aren't), but because with tiny dries you need the flexibility of the thin line to get that all important natural, drag-free float. The other option is fishing the riffles with smaller #18-22 nymphs that imitate the BWOs, this allows you to fish 5-6x tippet and often results in bigger trout than you catch on the surface. Tan Caddis are about done, but you may still see a few on milder days, and Caddis Larva (olive to green #14-16) nymphed deep are almost never a bad year 'round choice on the Farmington- there are tons of the natural larva on the river bottom & under the rocks. Egg flies have been deadly at moments lately, and will catch trout straight through the winter and into the early spring. Small nymphs & attractor/hot-spot nymphs are working underneath, and Junk Flies (Mops/San Juan Worms/Squirmy Worms, etc.) can also be a good choice in cold water when bugs aren't hatching. Don't be afraid to toss some streamers, as trout get more aggressive in the fall due to spawning, and then after they spawn they are hungry and looking for a big meal to put some weight back on.  Yellow, brown, and white or combinations thereof are all above average fall streamer colors, and standards like olive, black or brown are never bad choices.

Nymphing:
5x flurocarbon tippet should be about right, depending upon fly size, with 6x for the smallest nymphs. If you haven't yet tried it, the Cortland Ultra Premium Fuorocarbon tippet is amazing, by far the strongest out there with the most abrasion resistance, stretch, flexibility & clarity. Total game-changer, and an extra-good choice if you like to nymph with lighter tippets. Use patterns like BWO Nymphs #18-22, Midges/Zebra Midges #16-24, Egg Flies #10-18 (yellow/pink/orange), Caddis Larva #14-16 (olive to green), Mop Flies #8-12 (various colors, especially cream/tan), big Stoneflies #6-12 /Pat's Rubber Legs #6-10, Antoine's Perdigons #16 (various colors), Attractor nymphs #14-20 (Frenchies, Triple Threat, Egan's Red Dart, Rainbow Warrior, etc.), Quasimodo Pheasant Tails #16-22, and Fox Squirrel Nymphs #12-16.
Posted by UpCountry Sportfishing at 9:12 AM