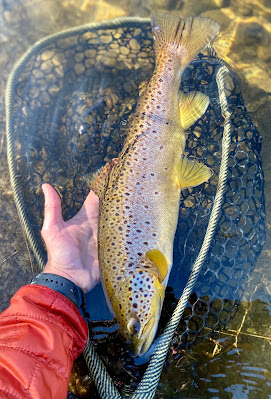 Our store hours through March: Monday through Sunday, 8am-5pm, 7 days a week. We will start staying open until 6pm on weekdays (not weekends, they will remain 8am-5pm) starting in April. When entering the store please try to maintain a 6ft distance from other customers if possible, and as per the governor's decree you must wear a mask/face covering of some sort inside the store. We are happy to deliver curbside if you are uncomfortable shopping inside. Just give us a call.

Two things of note:
Devin Olsen will be doing a Zoom presentation for the FRAA on this Wednesday March 24 at 7pm-he wrote “Tactical Fly Fishing” and is one of the stars along with Lance Egan in the “Modern Nymphing” & “Adaptive Fly Fishing” videos, he is also a long time member of Fly Fishing Team USA and an individual medalist in the competitive fly fishing world championships. It is open to everyone and it’s free, click on this ZOOM link to take you there. Meeting ID: 875 5607 2432, Passcode: 192242

Number two is that the annual Farmington River Cleanup on Saturday April 24 9am-3pm will be a team competition this year with awards for the most trash, strangest, biggest pile, shopping carts, and most fishing line. Everyone participating will be automatically entered into a free raffle for a T&T rod, and Simms G3 waders- click here to sign up.

Today’s fish pics: first up is an absolute beauty by customer Brad Holenstein- FYI that is a big Fishpond landing net (El Jefe) with a big opening. Next down is customer Jeff Bridgman with 18.5” of brown trout goodness. Pay your dues and you will sometimes catch nice trout like these. Those working the hardest and fishing smart are having the best success, especially on bigger, tougher trout. 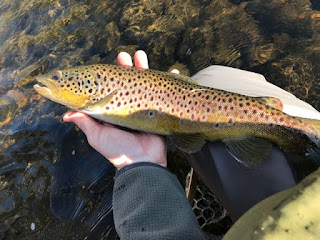 Opening Day update:
As of Thursday March 4th, Governor Lamont announced the early opening of trout fishing season to help alleviate overcrowding during COVID.What does this mean for us on the Farmington River? It’s business as usual here, as we were already open to Catch & Release (C&R)from the dam in Riverton 21 miles downstream to the Rt 177 bridge in Unionville, and that section remains C&R until the traditional Opening Day date of April 10 at 6am. All trout streams with TMAs remain Catch & Releaseuntil April 10 this year, and on all trout streams that are not TMAs and fall under general regulation you are now allowed to keep a daily limit of trout.

The river was stocked about 4 weeks ago upstream & downstream of the permanent TMA/Catch & Release (C&R), and the lower river was recently stocked in Collinsville/Unionville all the way down to Tariffville Gorge. The upper stocking section is the 4 miles from Whittemore up to the dam in Riverton, and the lower section is from just below the Rt 219 bridge in New Hartford downstream through Canton, Collinsville and Unionville, all the way downstream to Tariffville.

We got in a batch of 200 #14 tungsten beaded Early Stonefly Nymphs in both black & brown from Wade, and Rich Strolis is dropping off 400 of his #14 tungsten Early Stones (the “Infant Stone”)in both black & brown. The black ones imitate the black stones obviously, and the brown ones cross over to imitate both the Early Brown Stones as well as immature Hendrickson nymphs (which although not hatching yet get active and end up in the drift at moments).

Well the next several days are going to feel more like May/June than March with highs pushing into the 70s on Thursday. Flows have quickly come down to a very nice level of about 400cfs & slowly dropping. Most are still working hard for their fish unless they find a pod of stockers, but with reduced flows & rising water temps I would expect the fishing to gradually pick up now, even for the holdover & wild fish. Riverton water temps have been running anywhere from 36/37 to as high as 42 degrees, and downstream of that it’s getting into the mid 40s on warmer/sunny days. Water coming out of the dam is released from deep in the reservoir, and although it warms during the day with the mild weather and sunshine of late, because it is coming out of the dam steadily in the mid 30s currently it does not get as warm as the water further downriver. Mild weather here to stay now means that in the afternoons, the water temps below the Still River will be warmer than the upper river below the dam. And further downriver it can get even higher. Higher water temps in March = more active trout & bugs and better fishing. Expect to currently work for your fish, but the average size is excellent right now. It’s still the usual March quality over quantity deal.

Early Stones, most black, some brown, are the current glamour hatch.Warmer, sunny days will see the best Early Stonefly activity. Try also Caddis Larva (both regular olive/green as well as Cased), Pheasant Tails/Frenchies, and egg flies. Streamers can be effective too if you get them deep and fish them s-l-o-w-l-y. Having said that, experiment with retrieves because even in cold water there will still be days when the trout prefer a faster moving streamer. Top March streamer colors would include olive, brown, and white, and don’t overlook ones with a little yellow mixed in (olive/yellow, brown yellow, etc.). Streamer action has varied considerably from day to day, with nymphs generally being more consistent. But…. streamers will often move the biggest fish that may or may not eat a nymph. Early Black Stones have been out & about, some trout are rising to them at moments if you are in the right place at the right time. Subsurface is generally the way to go in March, it can be a tough month for dries. Most (but not all) bugs that are currently hatching remain small: Early Black Stones #12-16, Winter/Summer Caddis #20-24, Midges #20-28, and Tiny Winter Black Stoneflies #18-24.

Posted by UpCountry Sportfishing at 10:03 AM