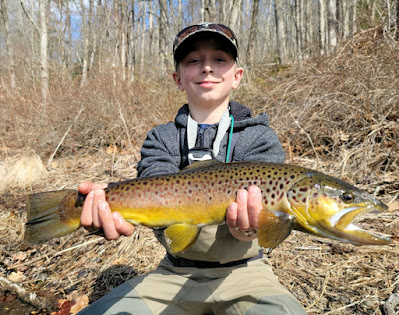 Our store hours through March: Monday through Sunday, 8am-5pm, 7 days a week.We will start staying open until 6pm on weekdays (not weekends) starting Monday, April 5. When entering the store please try to maintain a 6ft distance from other customers if possible, and as per the governor's decree you must wear a mask/face covering of some sort inside the store. We are happy to deliver curbside if you are uncomfortable shopping inside. Just give us a call.
We will be open on Easter from 8am-1pm.
The section of river in Riverton from Canal Pool (where Hogback Rd. intersects with Rt 20), downstream through Hitchcock to Pipeline Pool is CLOSED to fishing from April 1st until the traditional Opening Day of April 10 at 6am. They do this for the Riverton Derby so it's more like the traditional Opening Day, and during the closed period they stock it privately with some very large trout for the contest. The Derby WILL be going on this year, they cancelled it in 2020 due to COVID.

Lead pic is Zach's son with a 20" brown deceived on the surface with an olive emerges. Next down is an 18" brown on a Stonefly by customer Will Ryan, third is local guide Steve Hogan with a nice brown from a very windy day. Last but not least is a sizable brown by Zach's client Taylor- he lost an even bigger one right before this. 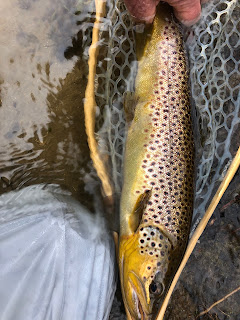 Opening Day update:
As of Thursday March 4th, Governor Lamont announced the early opening of trout fishing season to help alleviate overcrowding during COVID.What does this mean for us on the Farmington River? It’s still business as usual here, as we were already open to Catch & Release (C&R) from the dam in Riverton 21 miles downstream to the Rt 177 bridge in Unionville, and that section remains C&R until the traditional Opening Day date of April 10 at 6am. All trout streams with TMAs remain Catch & Release until April 10this year, and on all trout streams that are not TMAs and fall under general regulation you are now allowed to keep a daily limit of trout.

I’m back from vacation, been out of state the past week or so- I was fishing in the mountains of western North Carolina if anyone wants info on that area, it’s truly stunning and great fishing. Starting Monday 4/5 we will be staying open until 6pm on weekdays (still 5pm on weekends). Farmington flow is medium & clear with a total flow of just over 400cfs. I would probably recommend sticking from roughly UpCountry & upstream, as the East Branch is adding in another 300cfs about 3/8 mile downstream from us, putting that section of river from roughly Satan’s Kingdom and below at over 700cfs- still fishable, but definitely on the high side. I’m hearing that the fishing is starting to pick up with rising water temps and more bug activity. Blue Winged Olives (BWOs/Baetis) have joined the fray, they are big as far as BWOs go, #16-18. This is typically an afternoon deal, and if they don’t rise fish some olive type nymphs in that size range in the afternoons. Try also nymphs imitating Early Stones around a #14, and BMAR Hendrickson nymphs. Caddis Larva (both regular & cased) are worth trying too. The streamer bite has been solid lately, so don’t be shy about throwing some bigger ones to hopefully connect with some bigger trout. Water temps up by the dam in Riverton have been upper 30s to low 40s, and as you go downstream below the Still River and further downriver the afternoon temps have been pushing well into the mid 40s on milder sunny days.

The river was stocked at least once so far upstream & downstream of the permanent TMA/Catch & Release (C&R), and the lower river was recently stocked in Collinsville/Unionville all the way down to Tariffville Gorge. The upper stocking section is the 4 miles from Whittemore up to the dam in Riverton, and the lower section is from just below the Rt 219 bridge in New Hartford downstream through Canton, Collinsville and Unionville,all the way downstream toTariffville. 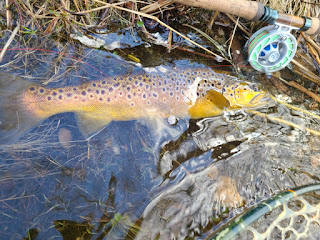 Water coming out of the dam is released from deep in the reservoir, and although it warms during the day with the mild weather and sunshine of late, because it is coming out of the dam steadily in the upper 30s currently it does not get as warm as the water further downriver will get on a nice day. Mild weather here to stay now starting this weekend means that in the afternoons, the water temps below the Still River will be warmer than the upper river below the dam. And further downriver its even higher. Higher water temps in early Spring = more active trout & bugs and better fishing. Expect to currently work for your fish to some degree (unless you find a pod of recent stockers outside of the permanent TMA/C&R section), but the average size is excellent right now. It’s still the usual quality over quantity deal, but increasing water temps & bug activity is starting to pick the fishing up. 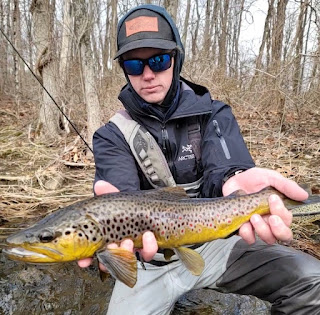 Posted by UpCountry Sportfishing at 10:51 AM