Our store hours through March: Monday through Sunday, 8am-5pm, 7 days a week. We started staying open until 6pm on weekdays (not weekends) as of this week. When entering the store please try to maintain a 6ft distance from other customers if possible, and as per the governor's decree you must wear a mask/face covering of some sort inside the store. We are happy to deliver curbside if you are uncomfortable shopping inside. Just give us a call.

Some beautiful trout this past week: first up is a awesome brown with a big paddle tail by Jason Grieco. Second is a beauty and PB brown for Spencer, a client of Mark Swenson. Third is Jeff Valus with a loooong brown. Fourth pic is Derrick's client Alexis Williams with a very pretty fish. Fifth pic is Zach with a quality brown. And last but not least is a big holdover by customer Richie Mendez.

FYI the section of Riverton from where Canal Pool (where Hogback Rd. intersects with Rt 20) downstream to Pipeline Pool (about 1/4 mile below where the Still River dumps in) is closed to all fishing from April 1st until April 10th at 6am. This is done to accommodate the traditional Riverton Fishing Derby, which will be happening once again this Saturday. 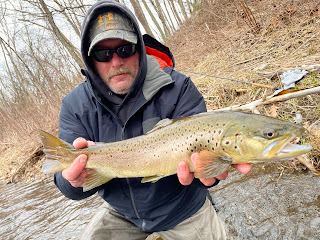 Opening Day update:
As of Thursday March 4th, Governor Lamont announced the early opening of trout fishing season to help alleviate overcrowding during COVID. What does this mean for us on the Farmington River? It’s business as usual here, as we were already open to Catch & Release (C&R)from the dam in Riverton 21 miles downstream to the Rt 177 bridge in Unionville, and that section remains C&R until the traditional Opening Day date of April 10 at 6am. All trout streams with TMAs remain Catch & Release until April 10 this year, and on all trout streams that are not TMAs and fall under general regulation you are now allowed to keep a daily limit of trout. 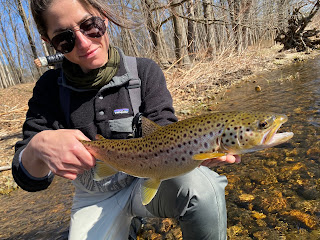 Looks like Spring is truly here to stay now, after some on/off colder weather recently- highs for today through the weekend are all in the 60s, with nights in the 40s. This bodes well for the fishing as it will raise water temps and make both the trout & bugs more active. Look for water temps ranging from about 40 degrees to as high as the upper 40s. Water temps are higher as you move downstream, as it comes out the dam close to 40 right now, and then warms on sunny days as the day progresses- highest water temps are mid afternoon through dusk. Fishing is finally starting to pick up, but there are definite bite windows that turn on & off in terms of subsurface action (a lot of the better dry fly fishing is in the afternoons though, and Winter Caddis are early/mid mornings). Lately it seems there is often an early to mid morning nymph bite, and then another in mid to late afternoon when it turns on again. This may be due to Behavioral Drift- a phenomena where a certain percentage of the nymphs & larva free drift downstream to redistribute the insect population early & late in the day during low light. It’s not technically a hatch, but to the trout it is- lots of bugs in the drift all at once, can make for some very good nymphing. Typically bugs in the drift will be stuff hatching in the near future, so think about what bugs will be going in about a month, and fish imitations of them, albeit maybe a size smaller. Things like Caddis Larva (regular and cased) & Pheasant Tails/Frenchies in appropriate sizes are good choices to imitate some of the Behavioral Drift bugs. FYI Blue Wing Olive nymphs are a super common item in behavorial drift almost all the time. 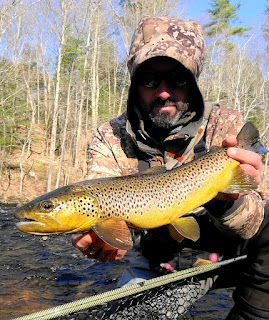 Normally we would be high right now in early April (median historical USGS flow for today is 649cfs), but the Farmington flow is medium & clear with a total flow of 300cfs- great level for both wading & fishing. East Branch is adding in an additional 130cfs 3/8 mile downstream of UpCountry. Blue Winged Olives/BWOs/Baetis are the current glamour hatch, they are big as far as BWOs go, #16-18. This is typically an afternoon deal, and if they don’t rise fish some olive type nymphs in that size range in the afternoons. You may also see trout rise to Early Stones in the afternoons when they are active, especially on mild, sunny days. Baetis/BWOs prefer cloudy, crappy days. Try also nymphs imitating Early Stones around a #14, and BMAR Hendrickson nymphs.The streamer bite has been solid lately, so don’t be shy about throwing some bigger ones to hopefully connect with some bigger trout. Play with retrieves, fly size, and fly color.

The river was stocked at least once so far upstream & downstream of the permanent TMA/Catch & Release (C&R), and the lower river was recently stocked in Collinsville/Unionville all the way down to Tariffville Gorge. The upper stocking section is the 4 miles from Whittemore up to the dam in Riverton, and the lower section is from just below the Rt 219 bridge in New Hartford downstream through Canton, Collinsville and Unionville, all the way downstream to Tariffville. You should see the state do a second round of stocking very soon. 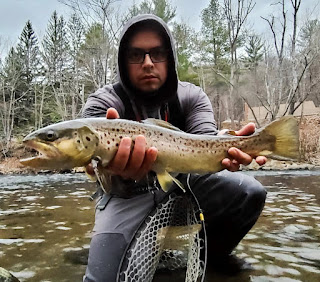 The new 2020 T&T Contact II series (10' #2, 10' #3, 10' 9" #3, 11' 2" #3, 10' 9" #4 & 10' 8" #6) is a home run, arguably the best Euro rods currently on the market. New improved materials, new guide spacing, down-locking reel seats are standard now, plus a new fighting butt design that is more comfortable. Recovery is noticeably better/crisper, the actions "tweaked" for more big fish playing power, plus the newer materials they use to make the rods inherently store more energy and give the rod more power for casting and playing big trout. The blanks are incredibly strong and much much harder to break, even when you do something stupid. These rods are easier to cast, will give you more distance, and they deliver with improved accuracy. Retail is $825. FYI demand is often exceeding supply with these rods, so if we don’t have what you want in stock get your name on a waiting list.

Posted by UpCountry Sportfishing at 10:59 AM